Read more
Galerie Zwart Huis presents the exhibition “Five decades works on paper: 1966-2014” by Richard Simoens from 4 October to 23 November. Simoens is highly influenced by Roger Raveel’s visual renewal, known as ‘The New Vision’, that he lead in the 60s. Simoens is Raveel’s second cousin and also followed courses taught by him. As Simoens’ work evolves, he creates his own distinct signature. The exhibition presents an overview of his works on
paper that extend from the Raveel period to today.

During his childhood, Richard Simoens (Deinze, °1947) and his parents visited Roger Raveel and his wife Zulma in Machelen-aan-de-Lei, Belgium. Raveel was the nephew of Simoens’ mother and the former neighbour and childhood friend of his father. At the age of twelve, Simoens was already following evening classes at the Art Academy of Deinze. In 1963, Raveel began to teach classes at this evening school and stimulated Simoens, who had dropped out of school, to take his painting class. Therafter, he took classes at the Royal Academy in Ghent and followed education classes in Plastics Arts at the ‘Rijksnormaalschool’ in Ghent.

The term ‘New Vision’ was launched around 1965 by the poet and art critic Roland Jooris. It was used as an explanation to Raveel’s artistic views. In the sixties, a group of students were strongly influenced by Raveel’s visual innovation. This innovation is different from Pop-Art and is distinguished by how one sees and experiences the reality in their own environment. From the New Vision language, Simoens developed his own vocabulary in defining the types of contrast in the sight of reality. During the seventies, Simoens not only began to teach, but he also produced many drawings in which he sought his own handwriting as a result of Raveel’s influence. In turn, he exhibited regularly with the New Vision group.

From 1980-1985, Simeoens stayed in a country cottage on the grounds of the Castle Lozer, Belgium. This site’s relative isolative and primitive conditions resulted in a pictorial austerity. He stopped his contact with the New Vision. He took upon a mental upheaval and decided to go his own way artistically. His new work consisted of acrylic paint on a coarse linen canvas and thereafter resin and tar on wood and paper. The lyrical interiors and Flemish landscapes of the past give way to the manifestation of the ‘I’.
The figurative ‘Peks’ (Resins) are life-size drawings with resin on paper and are a representation of the artist. The face of the naked figure takes on a spiral form that is an expression of infinity. Spirals and concentric circles appear regularly. They are primal symbols that represent the beginning of ‘being’ in the cosmos. Simoens is also fascinated by Chinese calligraphy and oriental philosophy. In later work, he leaves traces of the notion of being and non-being, yin and yang.

In the mid-eighties, the ‘Non’ gouaches arose. Simoens’ dark, achromatic Pek period is finished and colour makes its appearance again. The ‘Non’ period is his “personal renaissance”. His work remains autobiographical: figures with spiral heads are still implicating the artist himself and the word ‘Non’ is painted on each work.
The pictorial ‘Non’ content is readable without translation. ‘Non’ stands for both no and nothing. The vulnerable painter enters into dialogue with nothingness. He is finally settled with his earlier work. According to Simoens, “A Non-painting painting absorbs the imagination, proposing the thin, dividing line between seeing and imagining."

A recent series of drawings was given the title ‘Kairos’. Richard Simoens shows body fragments of himself. The spiral has disappeared. Robotic creatures and silenced heads look at us. In a small work, the painter cut out an image of his naked self and pasted it on another drawing of a studio corner. Like a reflection in a mirror, the model paints the artist. From the perspective of his body, his work shows sober lines, surfaces and a frequently disrupted paint application.
In Greek mythology, Kairos is the youngest divine child of Zeus. He is the personification of opportunity, a moment of indeterminate time in which everything happens. Kairos usually has a razor or a scale with him. This emphasises that the opportune moment is critical, sharply distinctive and decisive for the future. For Simoens the razor is the paintbrush that defies time, unpredictably grabbing a fleeting opportunity that can suddenly appear or quickly disappear. 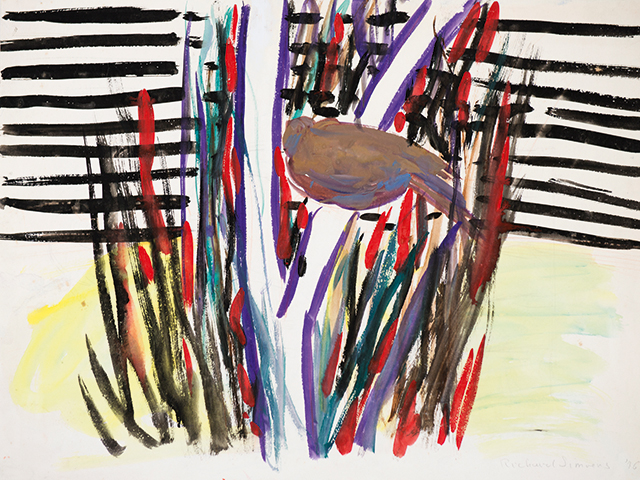 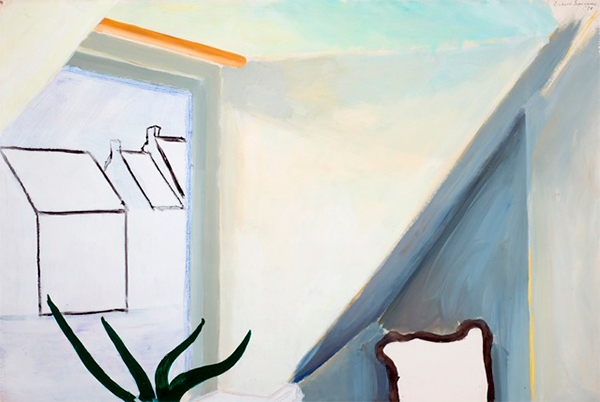 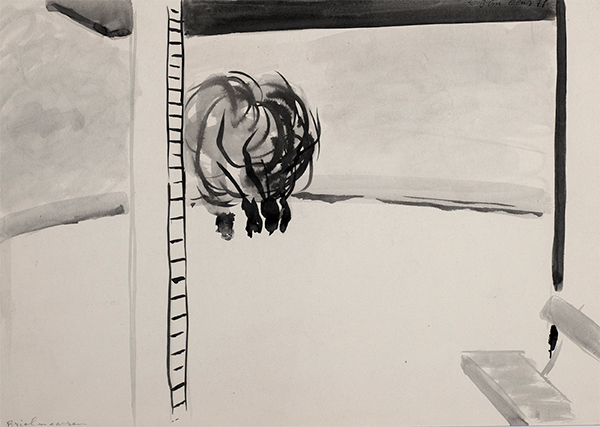 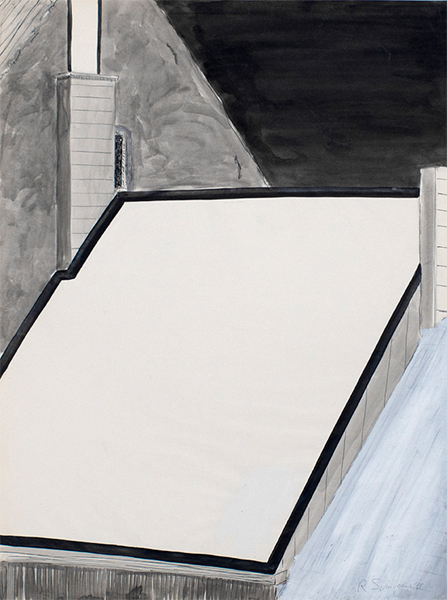 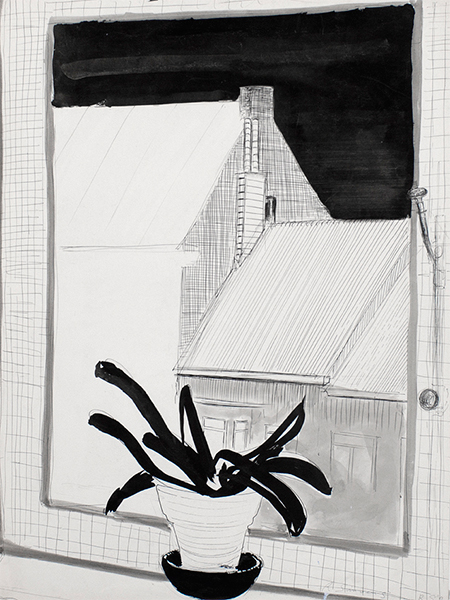 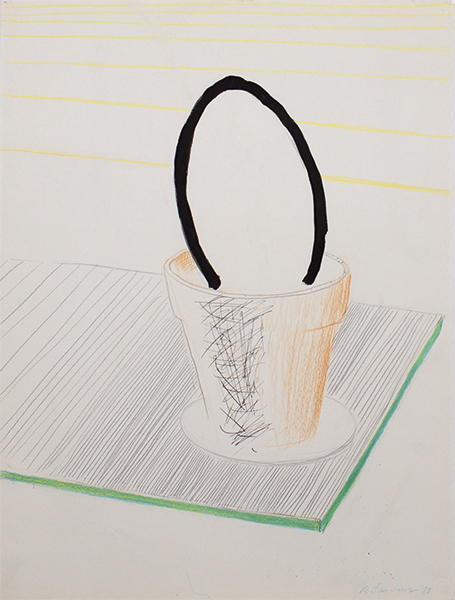 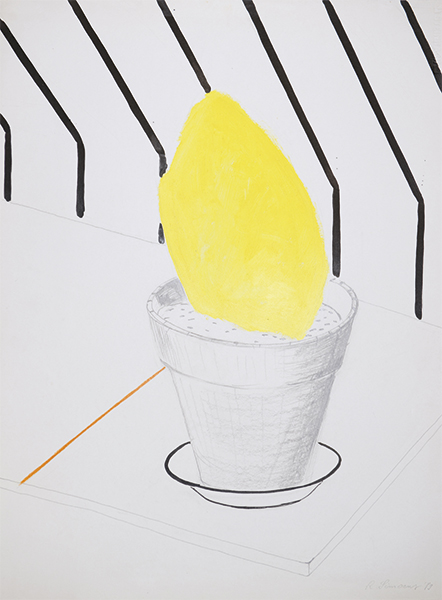 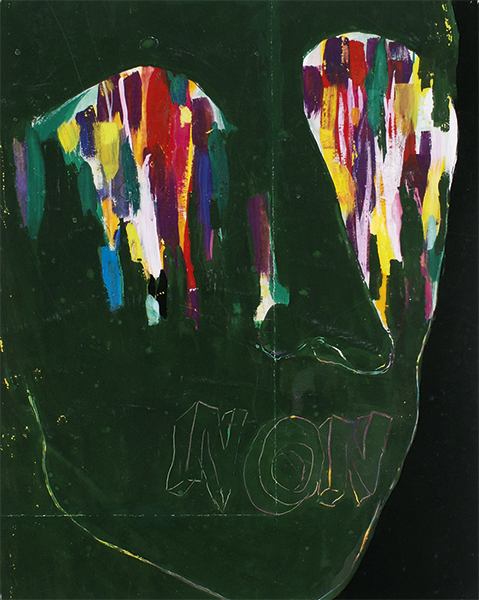 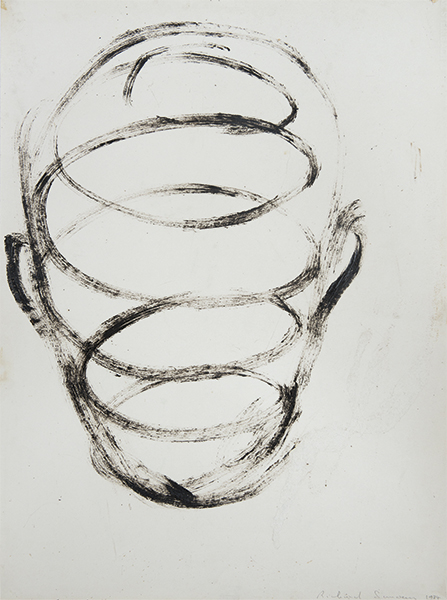 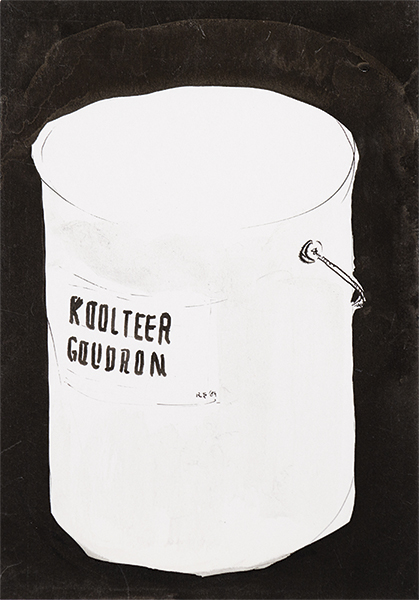 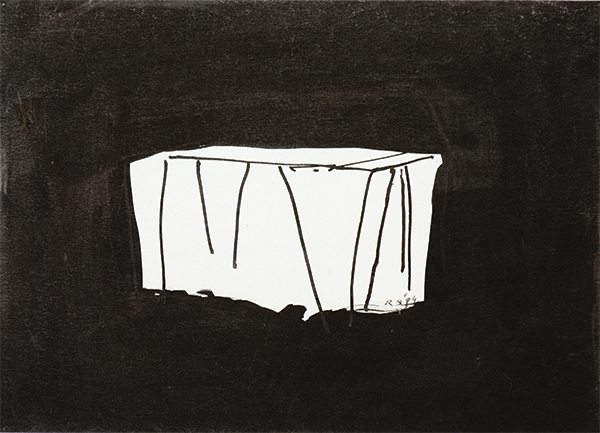 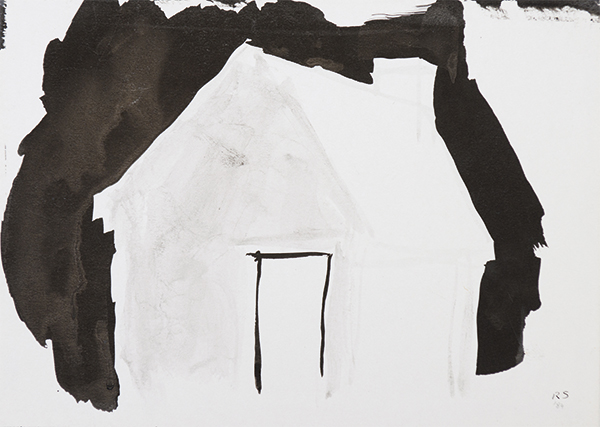 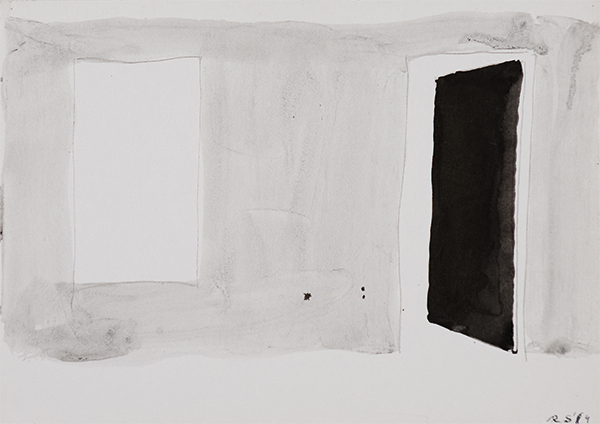 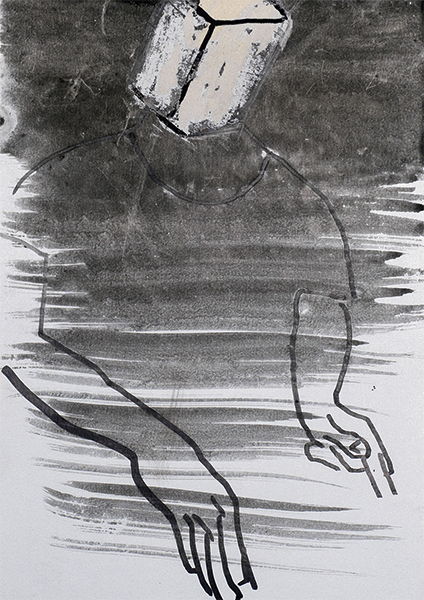 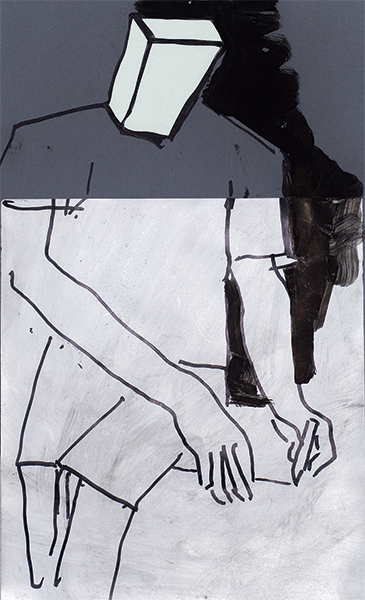 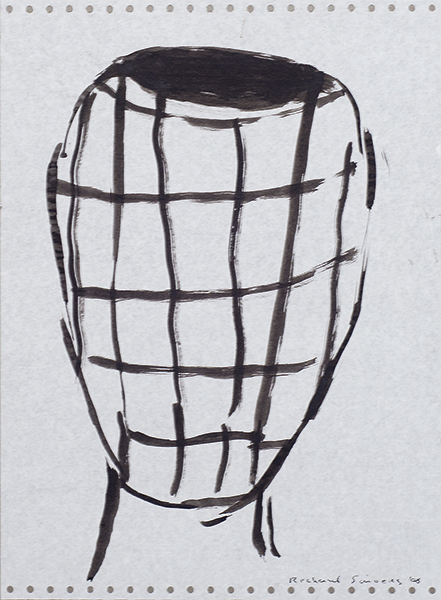 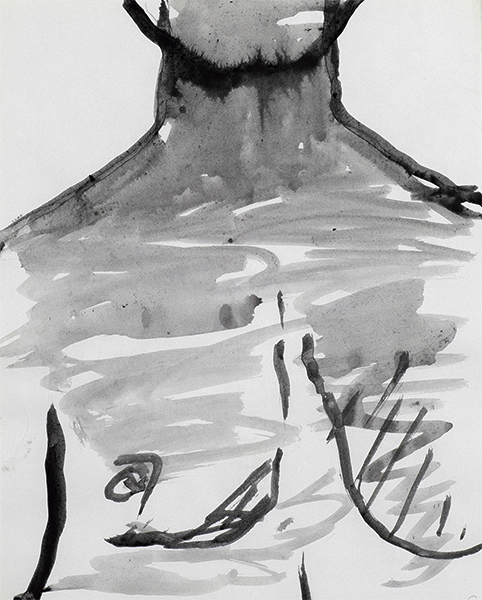