Read more
Colin Waeghe has been living in Leipzig this year.  This makes an impression on an artist, that is to say a sensitive sensory system.  The current coloured facades nonetheless betray the East German period.  Do walls still have ears? The traces of the curtain have not yet been erased.  Your steps are slightly more cautious when you walk in town, for fear to get caught in the mill.  Aren’t people being followed, eavesdropped on?  That is certainly the case once you have visited the ‘In der runde Ecke’ [In the Round Corner] Museum.  You do not feel too well for a spell.  ‘In the round corner’ was not the name of a catering firm, like the ‘Scheve lavabo’ in Brussels, but the headquarters of the Stasi, the secret police.  The rooms have not been embellished; they have remained the way they were left in 1989.  That sets the tone.  There are moreover all sorts of materials that attest to how inventive man can be when it comes to repressing fellow human beings who have different opinions and limiting the freedom to express them.  How clever people can be when they want to find out secrets and to spy.  And how people under duress can become more articulate without any lessons in diction, but through precise techniques that are not easily forgotten.  Colin Waeghe visits the museum regularly and puts his impressions on canvas.  That is the theme of this exhibition in the Black House.

Entitled ‘Nobody but you’, it sounds like an advertising or propaganda slogan:  ‘Nobody but you can make the difference’ ‘vote for us or buy our product’.  What lingers is the penetration of the message in the private domain and the appropriation thereof.  One of the works is a portrait of Alain Badiou, painted in Colin’s fragmented manner.  A reading of Badiou’s work gave him the idea that revolutions are forged in private premises, leading immediately to a fine paradox between public and private, the particular and the universal.  The Stasi museum shows the sad remnants of a fallen system that rightly deserved a great deal of criticism, but is the winner, i.e. the neo-liberal ideology a better system per se?  Badiou begs to doubt and does not hide his neo-Marxist ideas on that front.  This openness can be read in in Badiou’s portrait; but also from the emptiness that strikes you in the paintings with scenes from living rooms where people seem to be waiting for Godot.  Dull colours dominate the atmosphere.

The alienation which radiates from the works like faint sun through thick fog, may also be linked to one of the best known expressions that characterise our recent weltanschauung:  ‘Je est un autre’.  This sentence from a letter (13 May 1871,  the beginning of modernism, in a word) by Arthur Rimbaud, is a century or so later becoming, through French philosophy, the core of doubt about the ‘self’ as a well-ordered identity, for the benefit of the idea that the “I” is multiple:  I is another.  It expresses both the challenge of identity, with alienation as a side-effect, as appreciation of ‘alterity,’ the other, the opportunity for alternatives.  And Rimbaud may not have been the first to introduce this idea through literature.  When Cyclops ask him who he is, doesn’t Odysseus answer: Nobody?  And here we have the title of the series: ‘Nobody but you’.

Nazism was an enemy of the so-called degenerate modernism that purportedly had too many affinities with Communism.  One system is not the other, but a system is a system, i.e. “something that is put together” – as etymology teaches us.  So is every text, every work of art – something that is put together.  The word ‘construction’ should be used here to stress the artist’s ability to make something ‘feasible’ with his brain and hands.  The collision between system and construction confers force on Colin Waeghe’s works.  That is precisely where their beauty lies because it is the expression of the wisdom that each system becomes rigid and thus dogmatic and dictatorial – which is what Colin Waeghe brings to light.

Not far from Leipzig is Dessau, the place where Bauhaus was set up after it had to move from Weimar.  This school of design is a symbol of modernity.  And ‘modern’ is synonymous with democracy, the principle that the majority is the measure of things.  But the architects decided how that majority must live.  A nap in a Rietveld chair is also a torment.  What Colin Waeghe is actually on about is that culture always entails modelling.  He was consequently fascinated by a model making shop.  Once painted there is no longer any difference between the model and reality.  Between a murder instrument and a toy gun.  He likes to sow confusion.  Has the balloon crashed or is it ready for takeoff?  Is the pig’s head window dressing in the butcher’s shop or a political protest against an ethnic group or a prominent figure that people want to see slaughtered?

Colin Waeghe does not know.  Nor does he want to know.  Through his paintings, he shows us, from a Nietzschean perspective, different angles of incident of reality that have struck him.  His works are serving hatches of his experiences without instructions for use.  The message can go in every direction, as good paintings should. (Willem Elias) 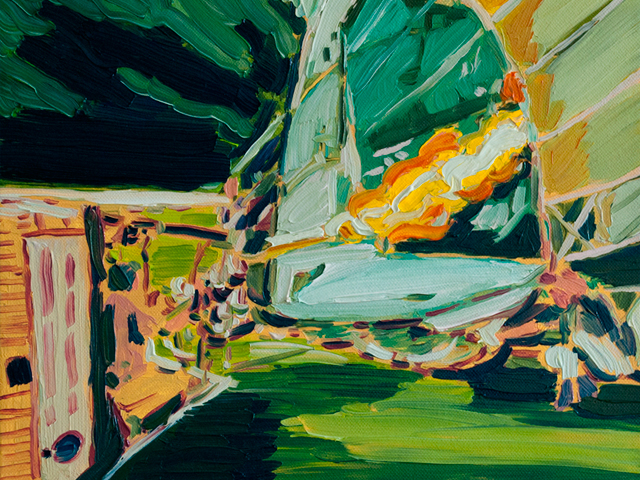 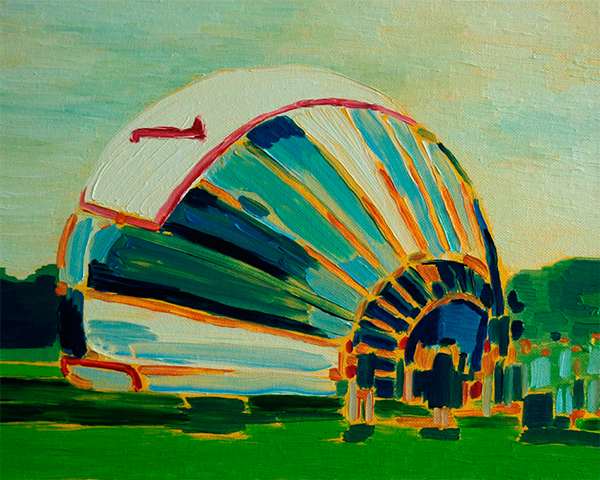 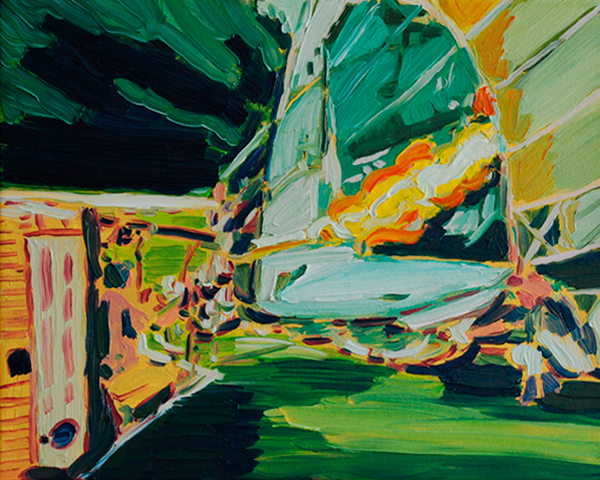 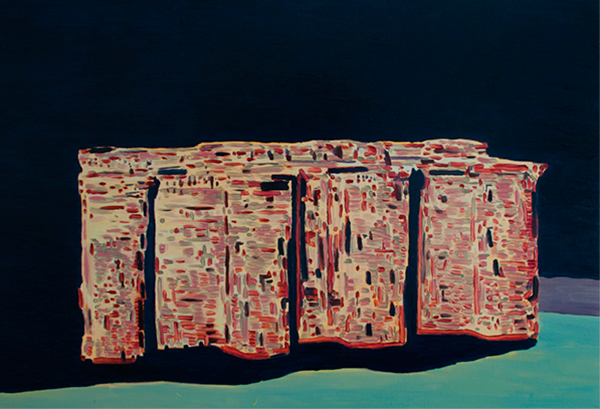 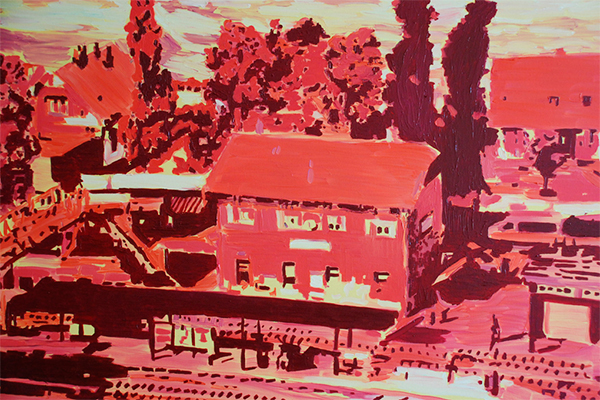 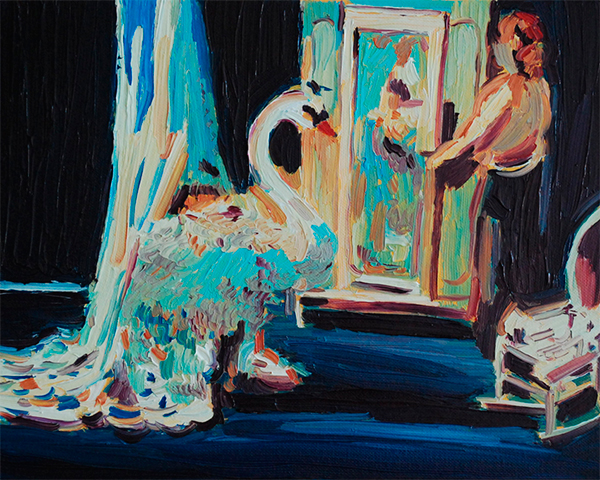 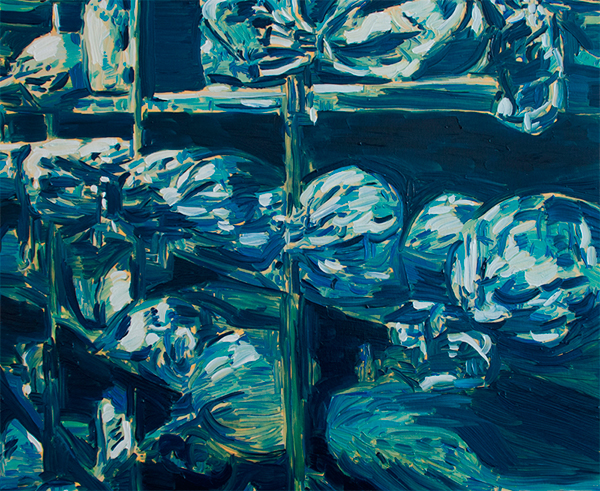 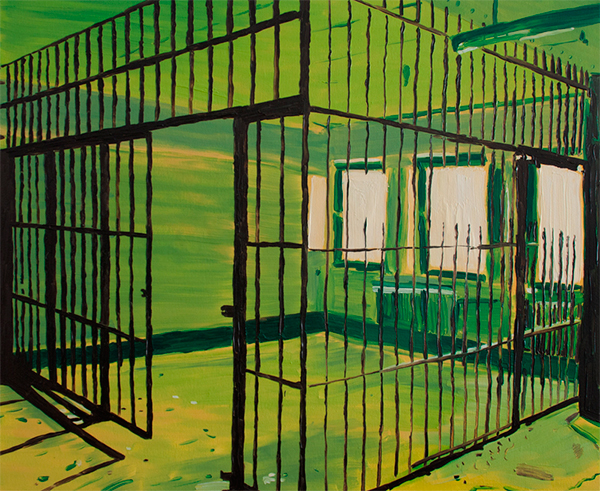 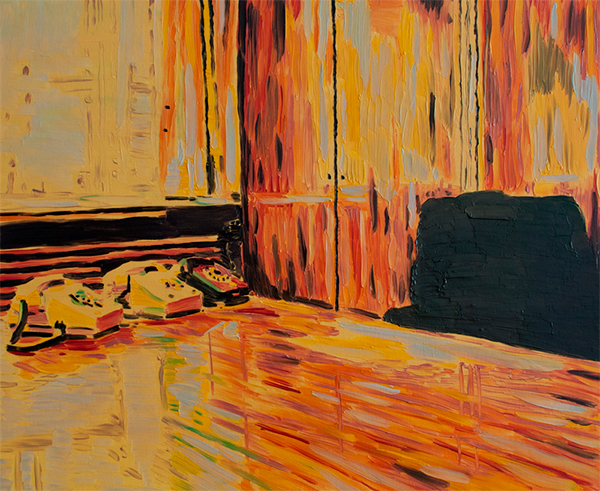 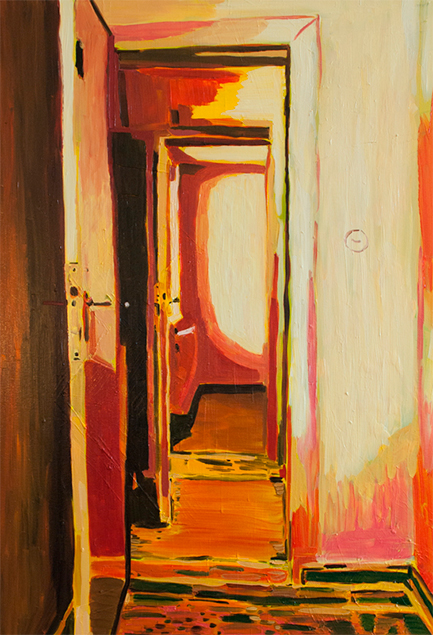 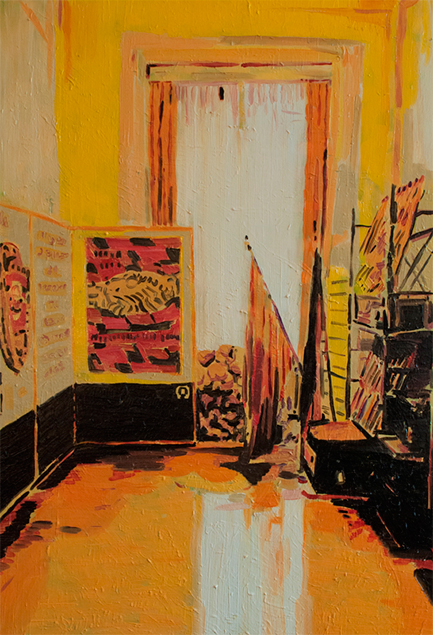 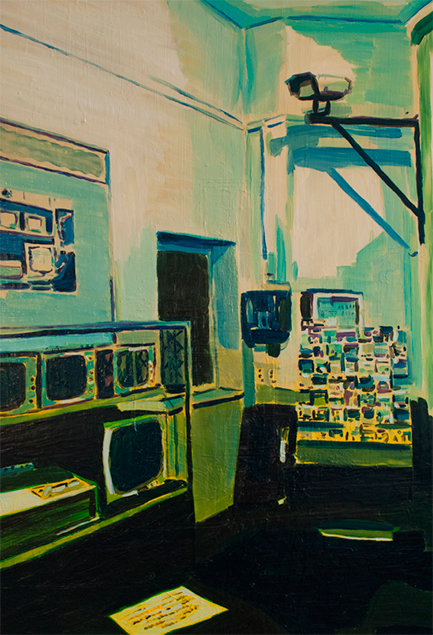 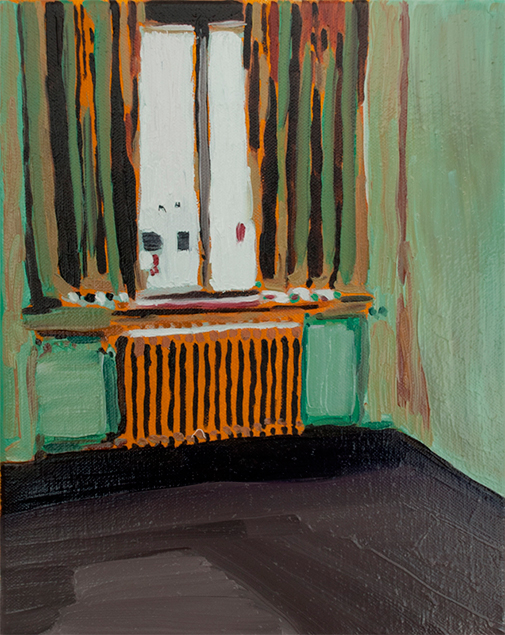