Read more
For this exhibition, Koen Deprez (b.1961) will bring all of the arrangements within his work together and create some new ones. Some of these have waited a long time to be realized, while others are completely new. In music, an arrangement departs from a fixed structure: the song already exists, and the arrangement determines the manner in which it is executed. The arrangements in Deprez’s oeuvre arise in relation to his own work (such as the Brodsky House, a variation of Own Home), or the work of others (such as The Conceivable House, which departs from a novel by Willem Frederik Hermans, or the ‘Annunciations’, which are linked to specific paintings by the Flemish Primitives).

A similar trait can be discerned in the work of Andrew Wyeth (1917-2009), the American artist who made hundreds of paintings based on just a handful of houses. When Deprez encountered Wyeth’s painting entitled Christina's World in New York’s MOMA recently, the image struck him so forcefully that he immediately travelled to Washington to visit an exhibition of the artist’s work. Wyeth had been taught to paint by his father, who attached great importance to technique, but also stressed that artists should be ready to embrace chance. Thus an open window, or a billowing curtain, could be an event. For seventy years, Wyeth painted windows (three hundred paintings), and both the exteriors and interiors of houses. Always the same houses, over and over again, as if this were the only way in which he could fathom the necessity of their presence. He initially painted in watercolours, with success, but later devoted himself to painting with tempera, which forced him to slow down. Although Wyeth’s observations and depictions are charged with personal memories, he nevertheless declared that it was through painting that he started to believe in the ‘absolute nothingness of his person.’

The defining event in Wyeth’s life was the death of his father, because it lent a sense of necessity to his work. Many paintings contain implicit references to death. As a tombstone for his own father, Deprez made a replica of his mother’s grave, including her name, so that the departed would return to her bosom in perpetuity. Within the context of a redevelopment project for the Palace of Justice in Brussels, Deprez suggested converting the building into a crematorium, and illuminating the dome during the incinerations. The urns could be stored in the countless rooms and hallways within the building. The edifice would become a beacon of death, a lighthouse, just like the Olson House that Wyeth so often painted, and which provided a landmark for sailors. In Wyeth’s paintings, the weathered but resilient houses, slanting light and shadows all point to an awareness of the passage of time and the proximity of death. But death ultimately casts its shadow over every single word and work of art, because mortality comes into our lives at the same time as our ability to use words.

In Deprez’s work, the awareness of death is linked to his rejection of the modernist dream of the feasibility of the city, and the concomitant belief in the possibility of a functional architecture. He experiences the world as inevitable, and only by embracing this inevitability can freedom can be achieved. As a student, Deprez made a work that consisted of two curved, U-shaped pencils, each of which had a long and a short end. In one pencil, the elongated end was sharpened to a point, and in the other, the short. The first, which was useful, he called decorative. The second, which was unusable, he deemed functional. His tutors marked his work as insufficient. Today, in Word House, we can discern how he suffuses an immutable building, similar to one of Wyeth’s houses, with stories. Or how he transforms a rectangular box into a Baroque universe via structure, images and fictional narratives borrowed from a novel. Time and time again, we witness his acceptance of the inevitability of things and the unexpected beauty that emerges as a result, a beauty that not only celebrates death but also, for a fleeting moment, transcends it.

When I last visited Deprez, he had just delivered a lecture on an arrangement of his pedagogical project entitled Self-Navigation. The starting point was the lack of space in the school to which he had been invited. Deprez pleaded for the architecture students to build their own school. This process would presumably have a far greater effect on them than the traditional education programme. The new building would also attract a different kind of student, one who could, in turn, continue to add to the construction as part of an ever-expanding arrangement. The image that Deprez used to explain this project was a collage based on an inverted conical tower by Athanasius Kircher (1602–1680): since it rested upon the apex, the students would always be able to build on the cone’s base. Suddenly, the design changes, and we see a shape similar to Edwin Abbott’s ‘Flatland’, one corner of which touches the base of the upside down cone. Broken fragments of architectural debris float above.

In the silhouette of this imaginary building, I recognize the complex, unpredictable outlines of the ‘Annunciations’, which are the result of obscuring different elements of historical paintings with layers of white paint. In the three successive phases of their construction we recognize the structure of the ‘exquisite corpse’, which also happens to be the illogical engine that drives The Conceivable House. In the latter project, a sequence of very different rooms is draped in an elliptical form around a 17-meter long corridor (as in a hotel). Deprez points to a sentence from a book by Joseph Brodsky that, coincidentally, is dedicated to Venice and to the syncopated pattern of its streets: ‘The power of a narrative text does not depend on the story itself,’ Brodsky wrote, ‘but on the sequence of events.’ In a text from 2005, which we worked on together, we included a paragraph entitled ‘Acceptance as the New Freedom’. According to Deprez, the world cannot be constructed or made, although events certainly take place. In a gripping novel or elegant design, the events follow one after the other. Sometimes, an event consists of embracing a state of affairs in its absolute entirety.

In Europe, double-glazing is nowadays filled with Argon gas, but dry air is still the norm in other parts of the world. Deprez is fascinated by such a strange, vertical slice of invisible reality, one that is reminiscent of Duchamp’s bottle of Parisian air, but also the medicine bottle containing the steam from Hitler’s train, which was captured by Karl Valentin, the German comedian and film director, and exhibited in 1934. When the door of the Zwarte Huis gallery was damaged, Deprez suggested replacing the window with double-glazing filled with Indian dry air. A few days later, he ordered two double-glazed panels, one from Israel and one from Palestine, and exhibited them side-by-side in a frame. This work is reminiscent of Tricycle for Twins: a bicycle with two sets of handlebars and a double saddle. Does this image allude to an unfeasible game or impossible flight? It is a compelling arrangement, one that forces us to remain open to any event with the potential to make life a little more bearable. 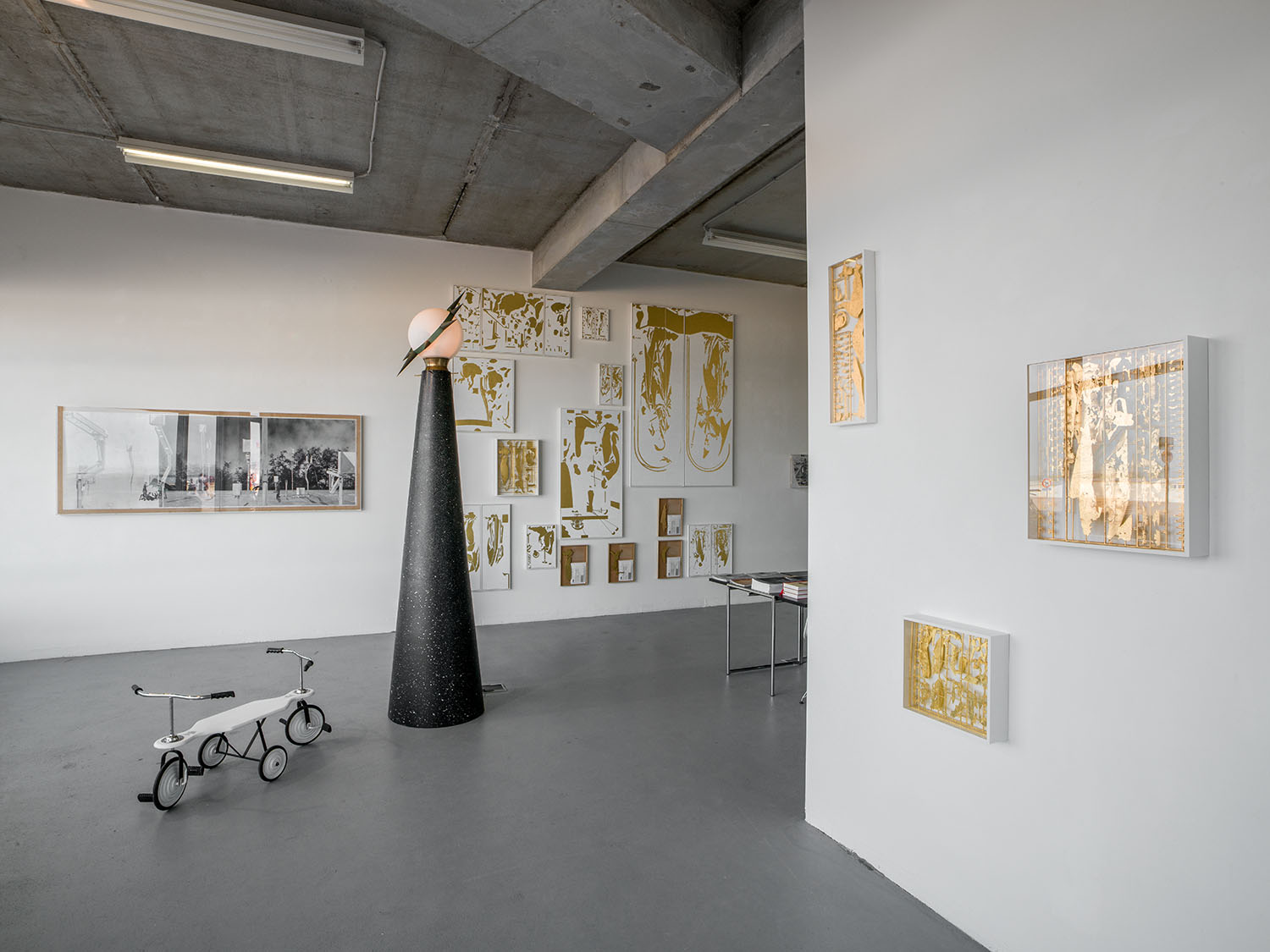 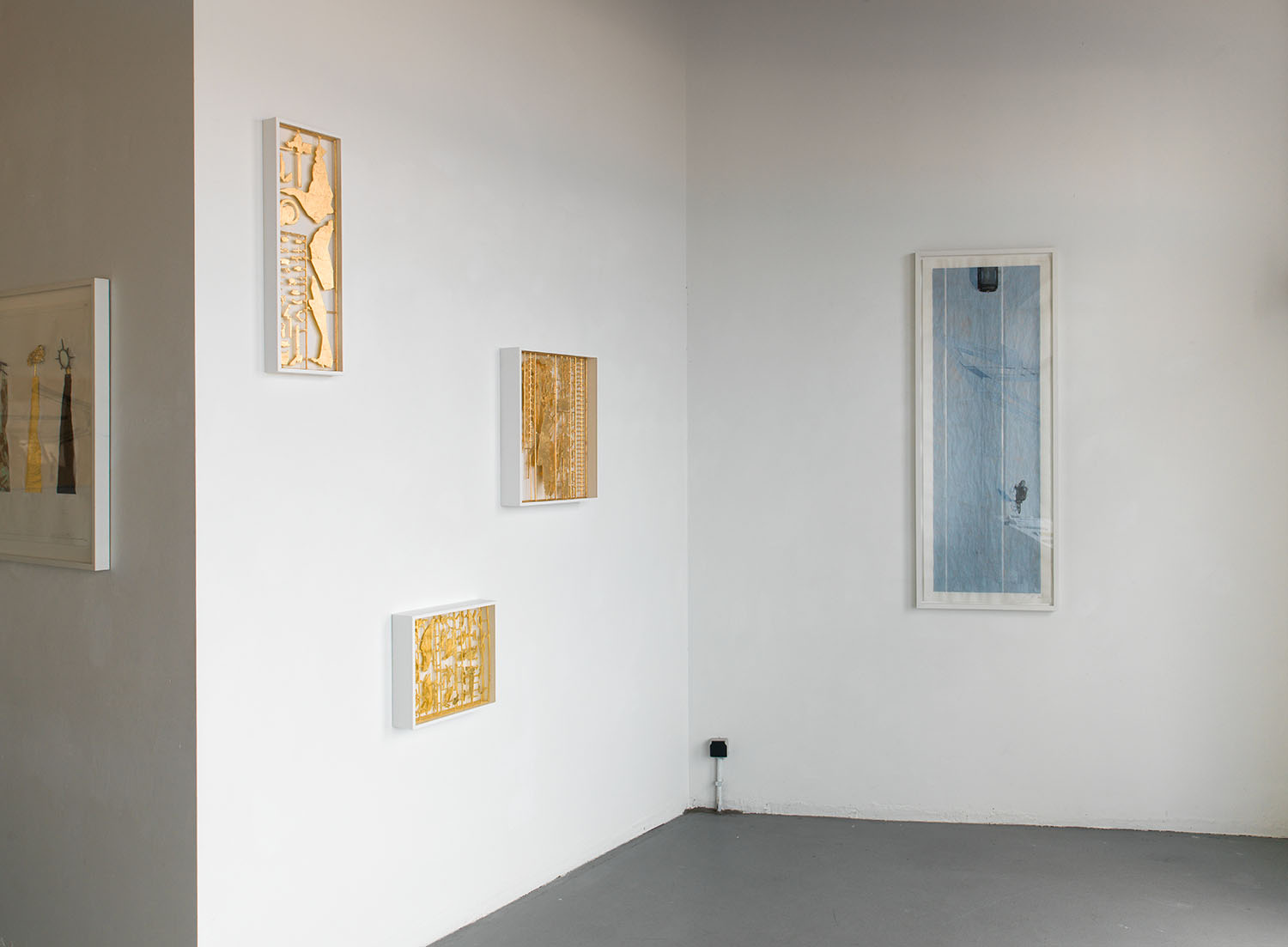 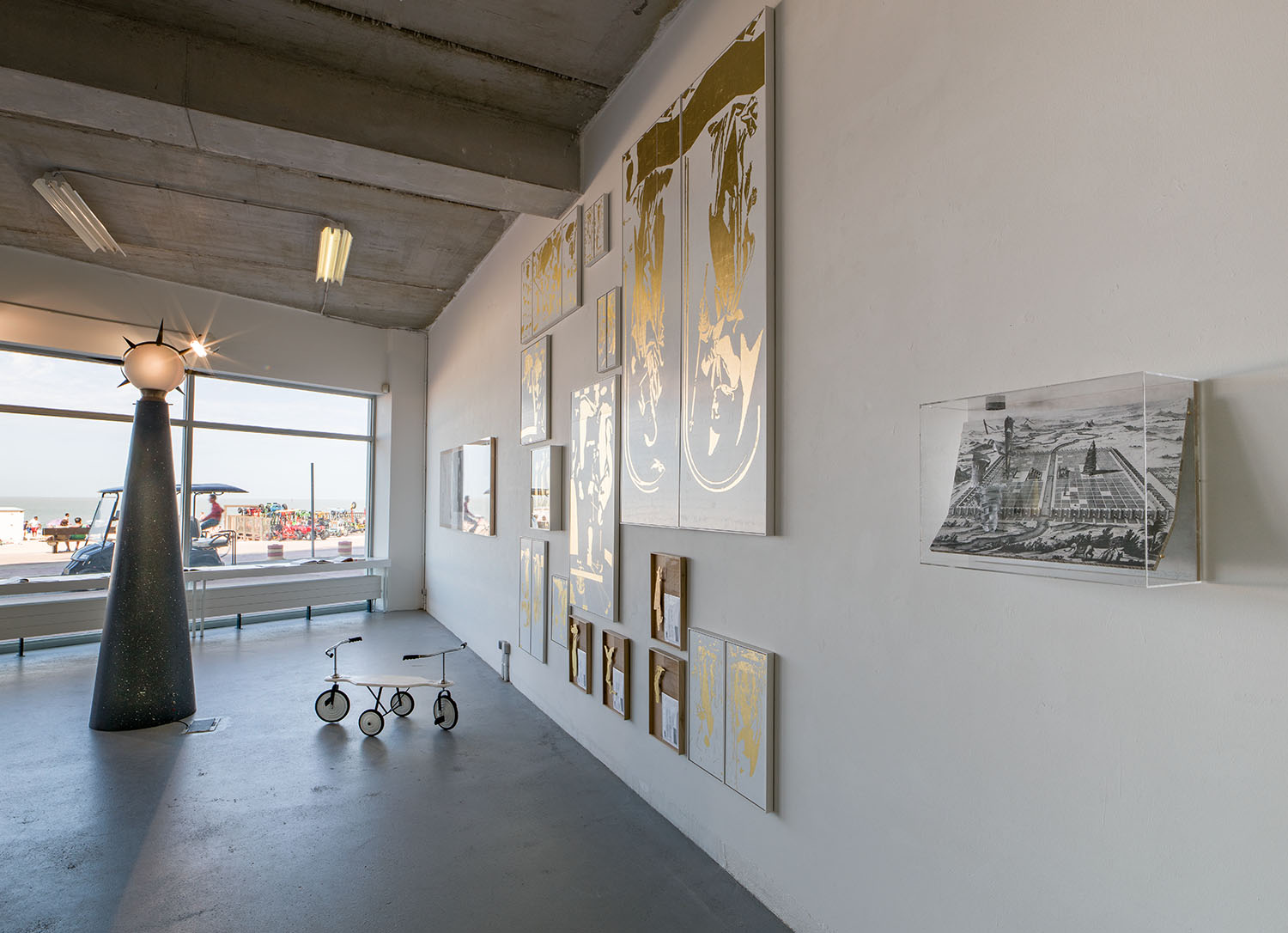 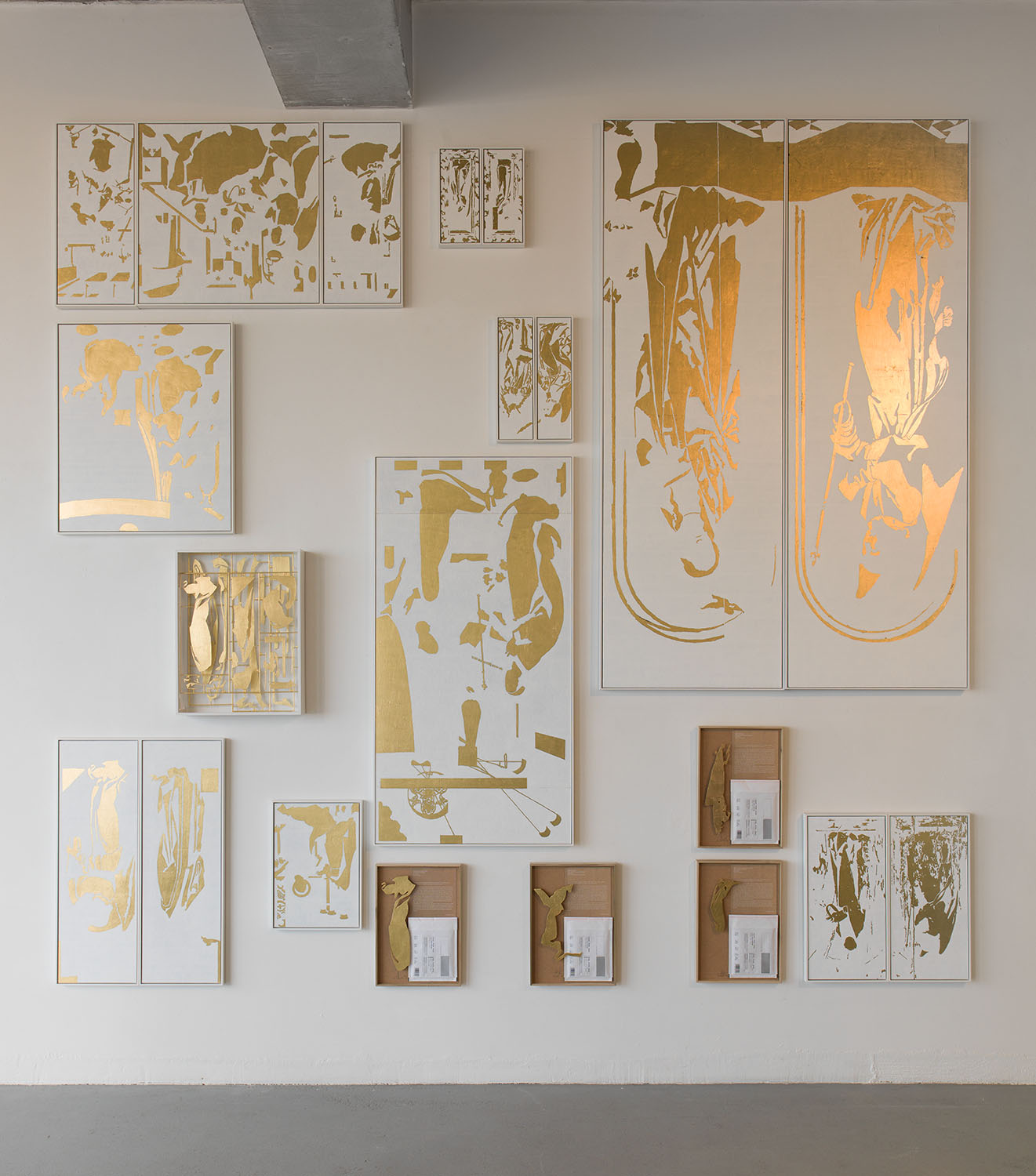 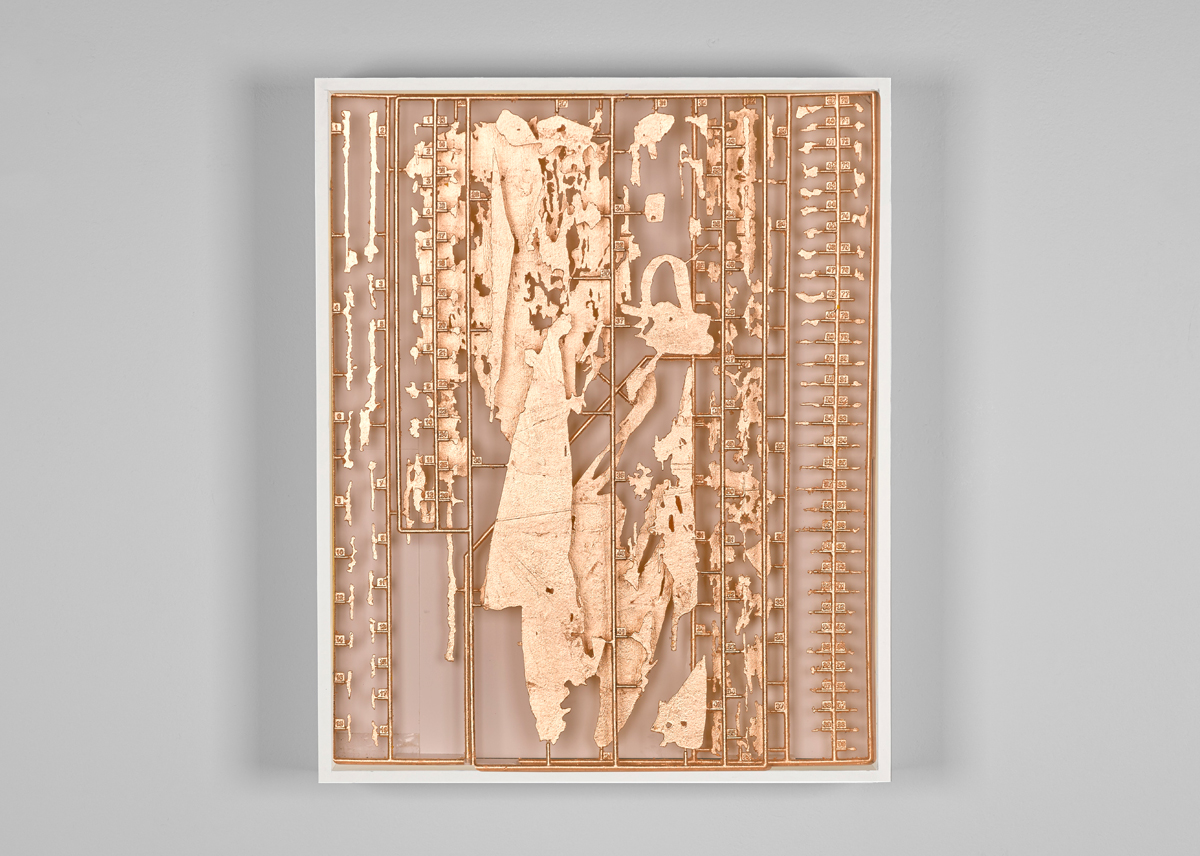 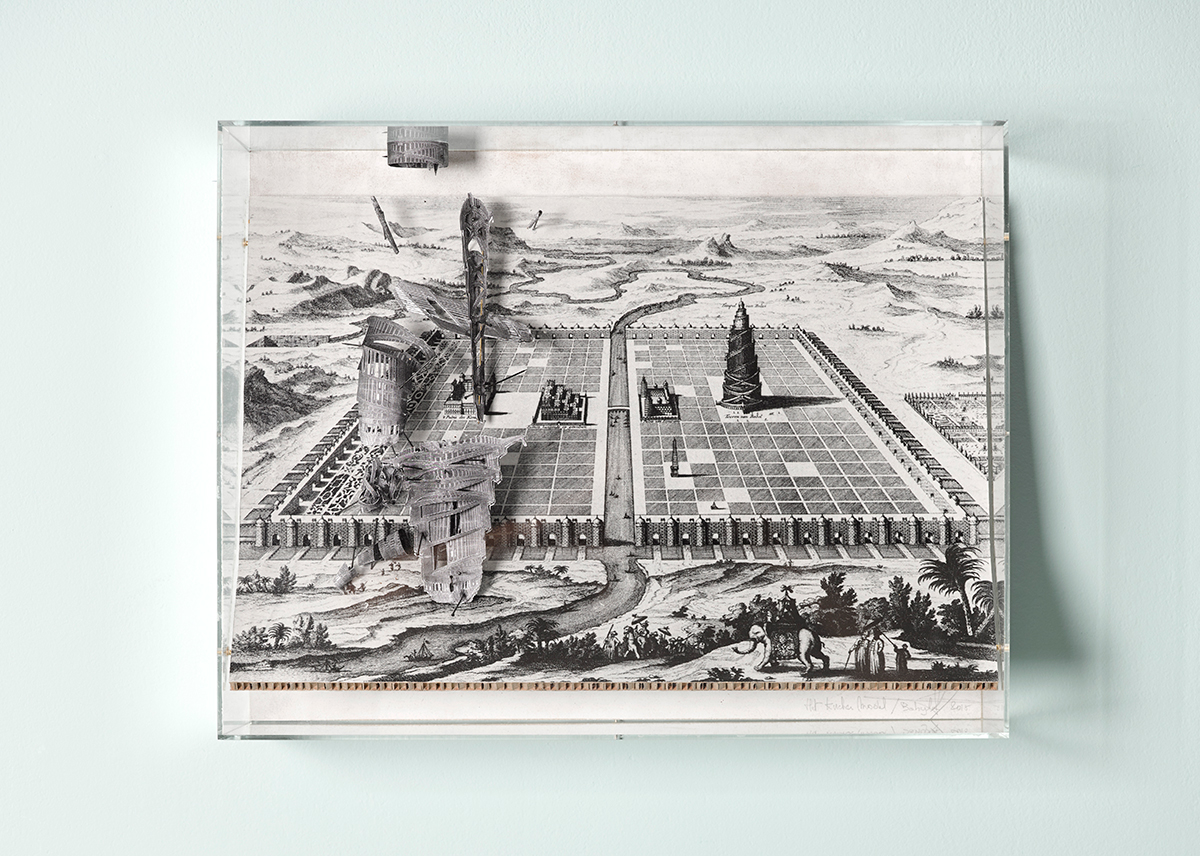 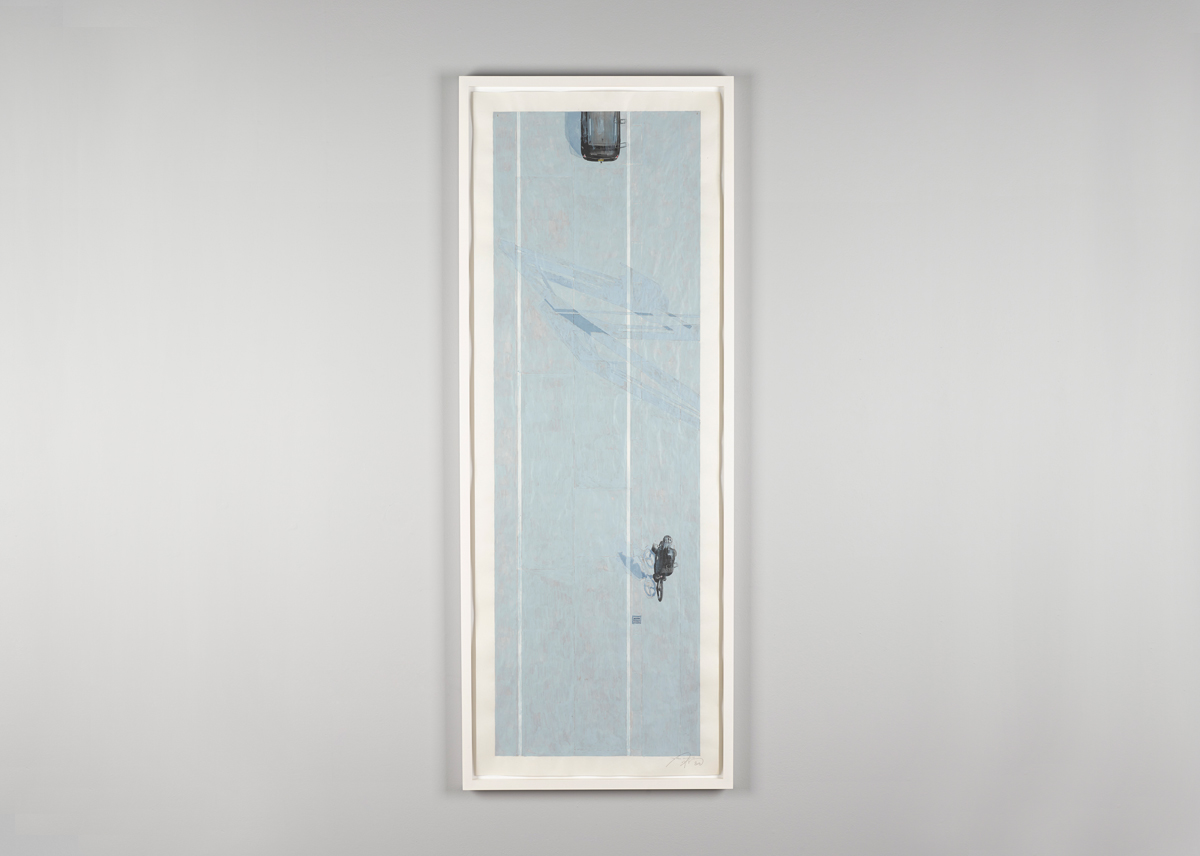 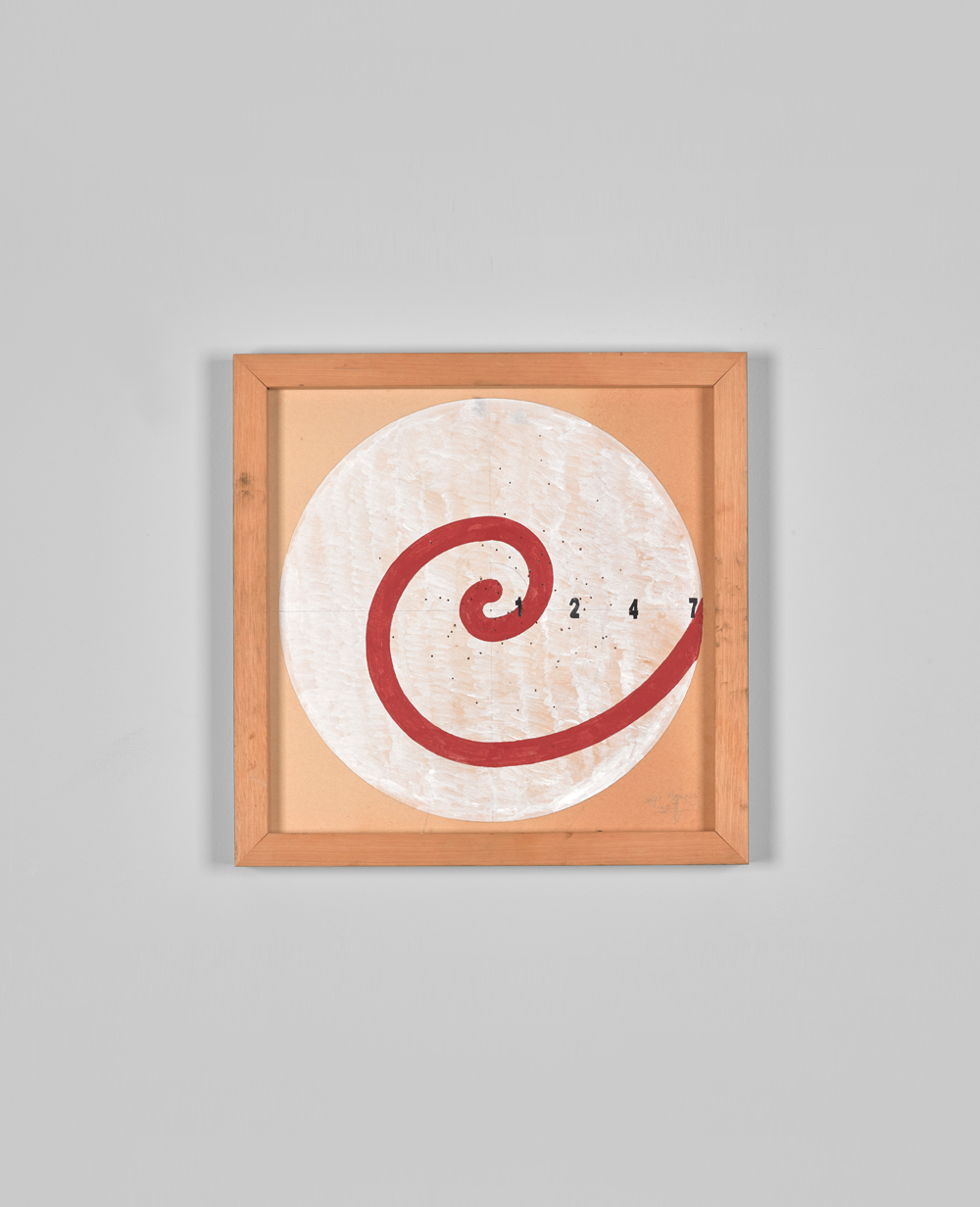 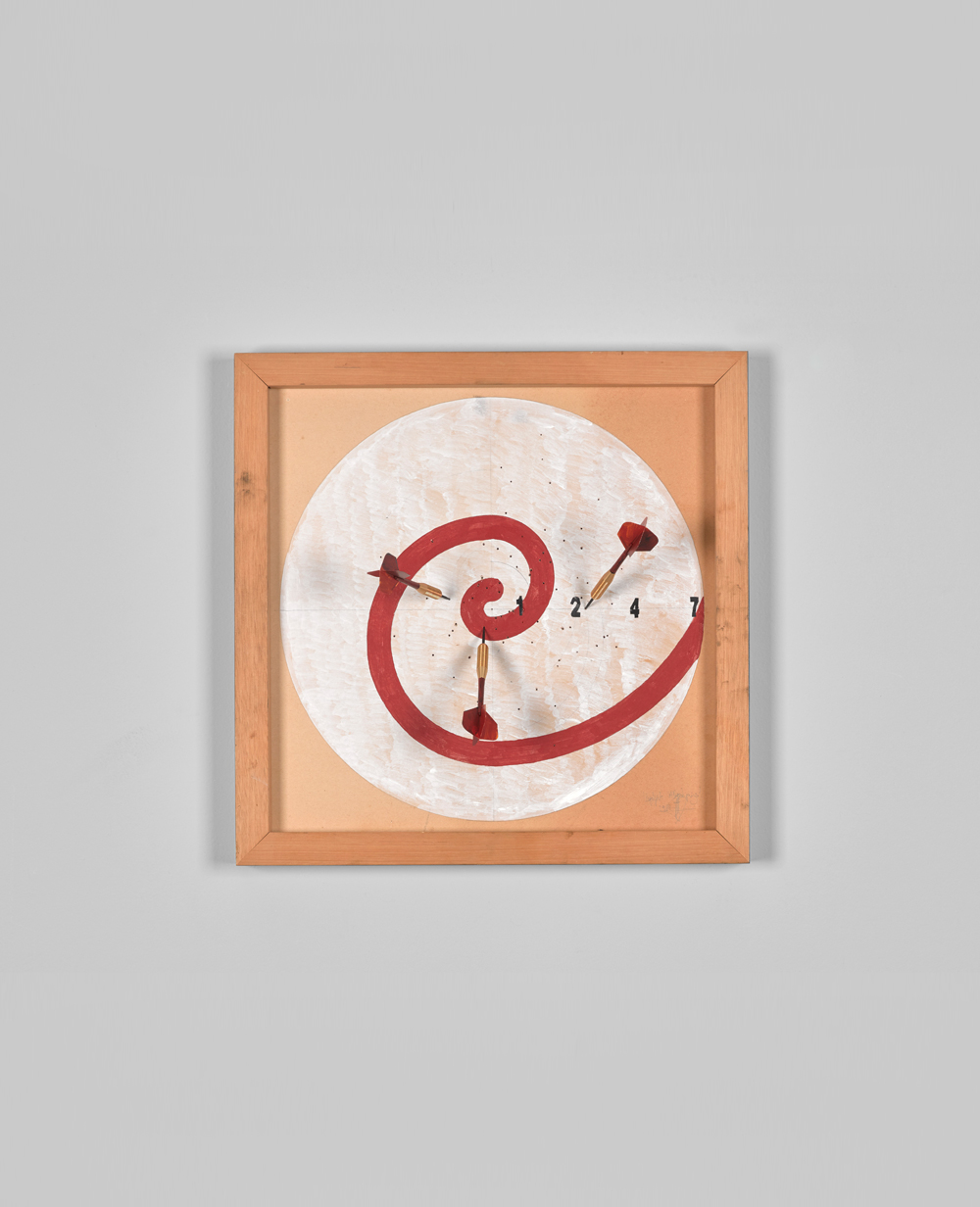 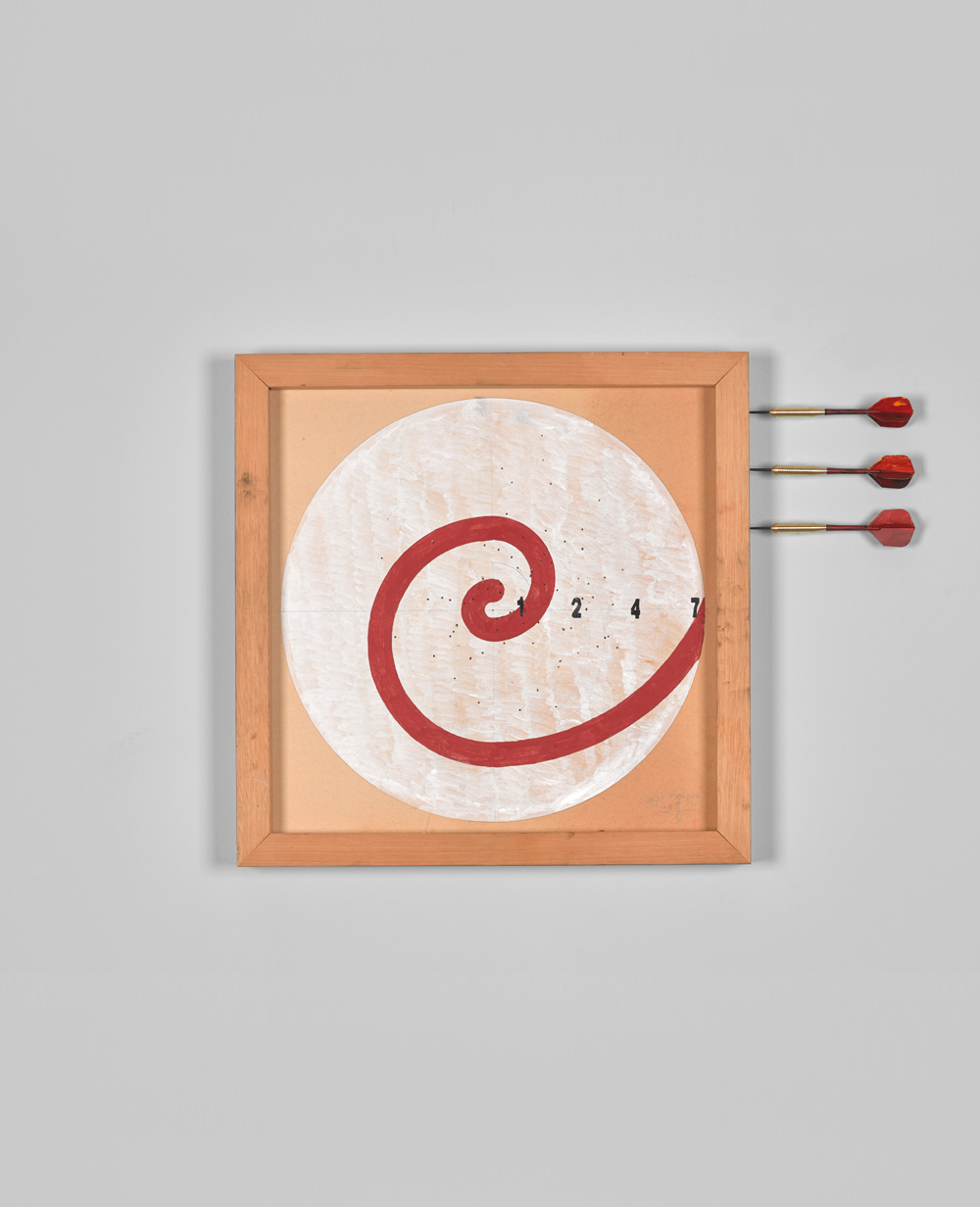