Read more
On 7th January 2017 Albert Pepermans will turn seventy and the Galerie Zwart Huis in Knokke is organising a birthday party with seven large paper paintings and a few smaller pieces bursting with energy but tinged with a darker side. It’s a kind of mini retrospective going back to 1987, each piece selected by the artist himself. “I wouldn’t say they’re seven milestones,” he points out. "I’m a child of the pop-art era and the anarchy of the 1960s. Each age is unique. I just can’t put on rock ‘n’ roll performances lasting four hours and ten minutes till I’m foaming at the mouth any more. There is still some rock ‘n’ roll in my work, I think. It’s very unpolished and I’m always busy. You have to push on.”
The rock ‘n’ roll content in his work became legendary in the 1980s together with his unorthodox use of media, his sense of colour and the speed he works at. After his first solo exhibition in 1979 his international success came quickly. Albert Pepermans is a graphic designer by training and was employed by Humo as an illustrator until he quit. Shortly after he became a lecturer at the Luca School of Arts in Ghent. This gave him the freedom to do as he pleased. The art world greatly appreciated his performances, acting like a guerrilla: the painting was secondary. In 2012 they were put together in a publication called ‘The Papermance Performance’.
It’s difficult to pin down this artist from Kortenberg. In 2013 he turned his unconventional eye to photography and a few years ago he came back with an impressive performance. He’d previously done performances in Brussels, Paris, New York and at the Berlin Wall. The dynamism of Berlin and New York hit home and skyscrapers became a recurring theme in his work. He got down to work with American cartoon characters and had a soft spot for Crumb’s underground drawings. Nowadays he’s probably the most famous of the three cooperation projects with Hugo Claus in the 1990s. They were presented at the Watou Art Festival in 2011 alongside a series of Pepermans’ recasts.
A key work in the exhibition is 'Levitation' from 1990. It portrays a man looking away wearing a hat in front of a red background with stars or flowers. “It almost looks like a wood engraving. I don’t know if it’s a self-portrait. It’s almost the original form of my figure with a hat, a symbol of the hesitant artist looking into the distance. Next to him is a stone or a cloud. In his hand he has the rudiments of a house, which is important for me to be able to work. I got the figure from an American wearing a hat in a car advert”, Pepermans reveals. The guy with the hat, a recurrent theme, has basically become his signature.
These works are 150 x 200 cm. “This is my playing field. Like a tennis player who knows the court like the back of his hand”, he explains. They’re painted on wafer-thin pattern paper, a favourite medium of his, or other paper creased in a similar way. Once mounted on the canvas the paintings contain ripples and his art springs to life. These days he’s exploring the abstract, even though he brings in figurative elements. He’s always used stencils and stamps: a rubber stamp of a woman’s head is one of his drawings. He paints with spatulas. 'STAMP 000127' (2015, acrylic and ink on paper) is a painting full of vibrant colours, a frail lozenge pattern and seemingly black heads. “It’s less of a narrative than before”, Pepermans notes. “I’ve sort of discovered the abstract and that has given me greater freedom. I might get more figurative, who knows?”
What we do know is that there will be 70 copies of a book of drawings at the exhibition. Inside are risographs, four-colour printing on a sort of photocopier, in A3 format in Japanese style bound with string. 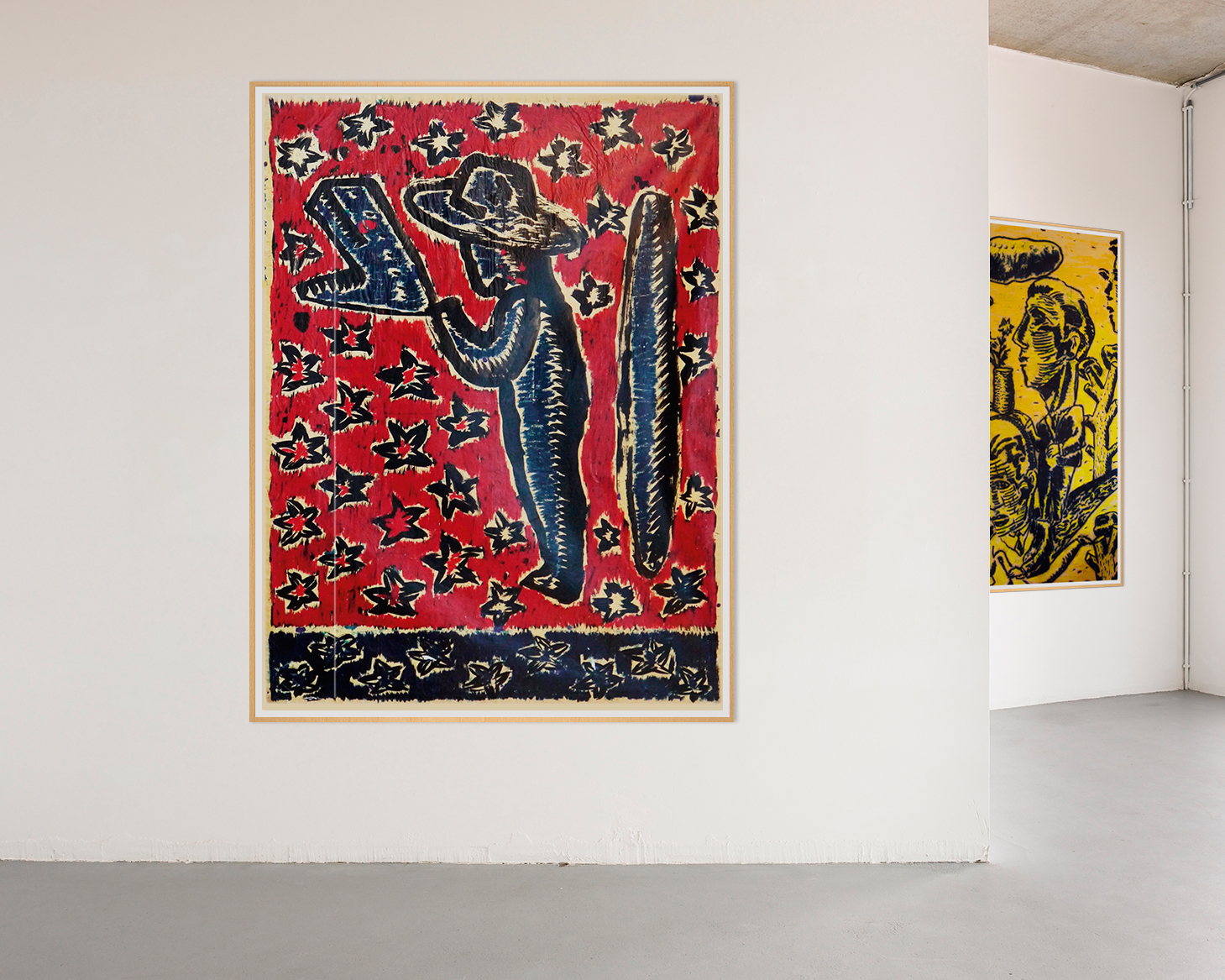 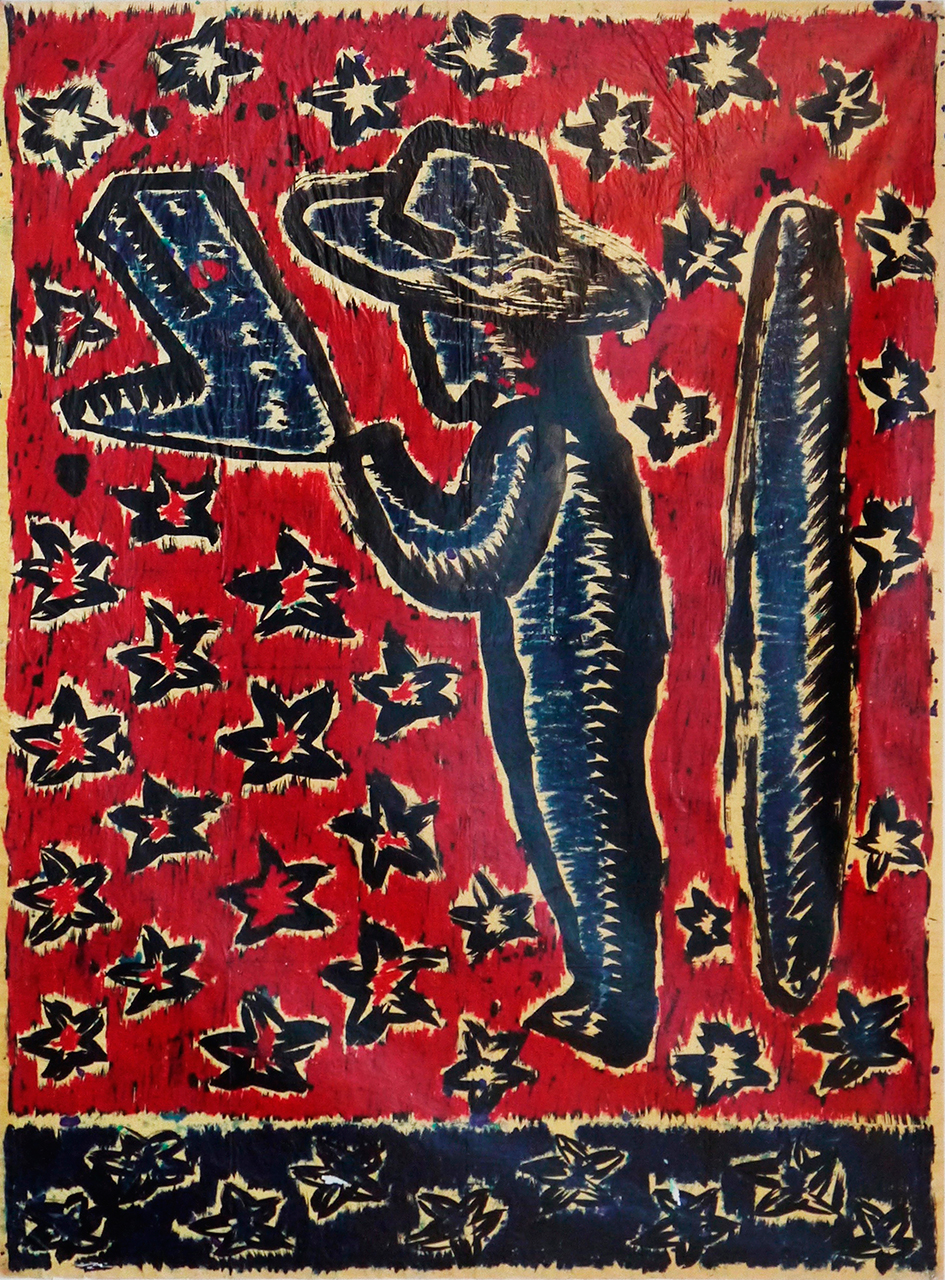 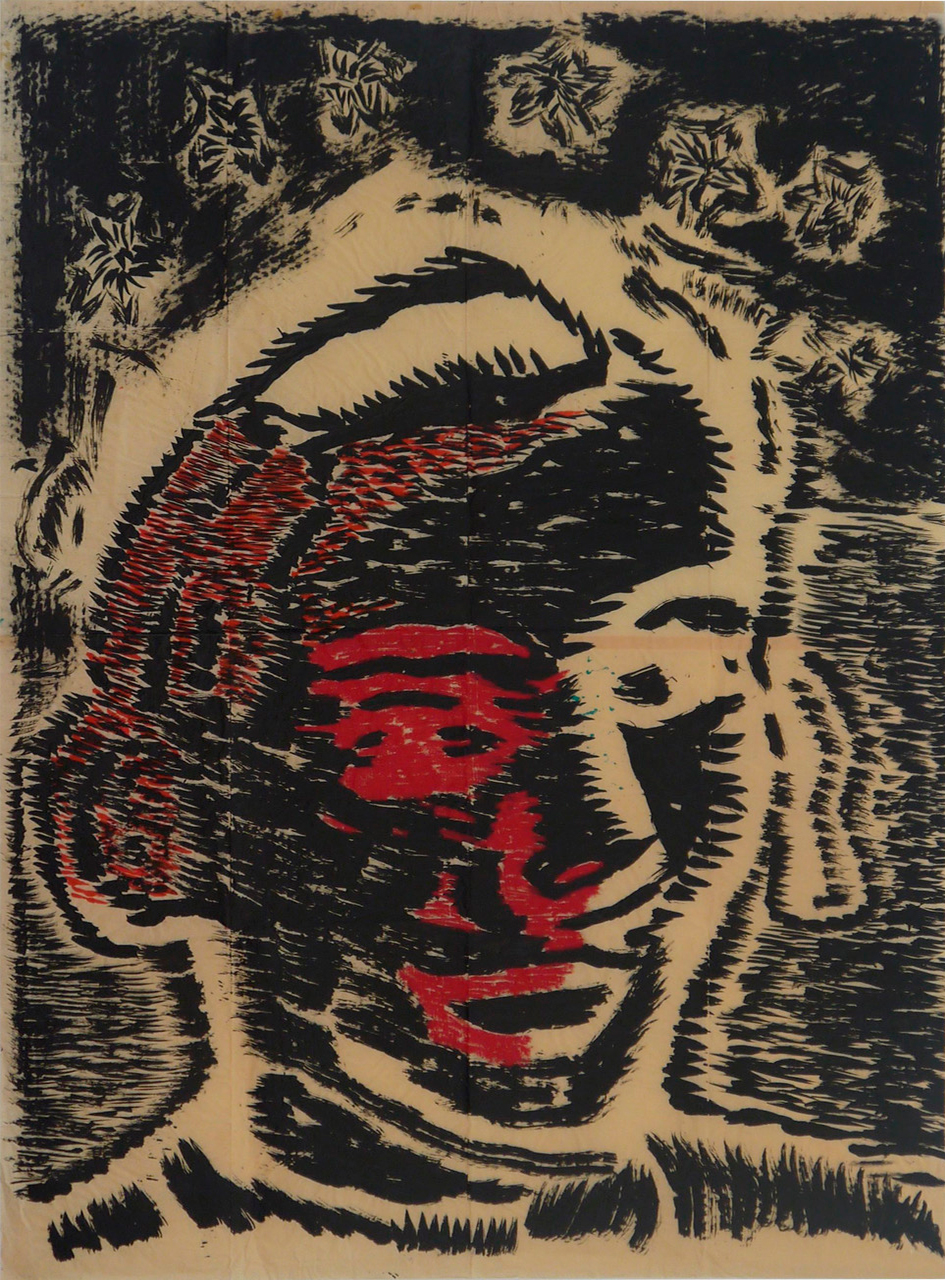 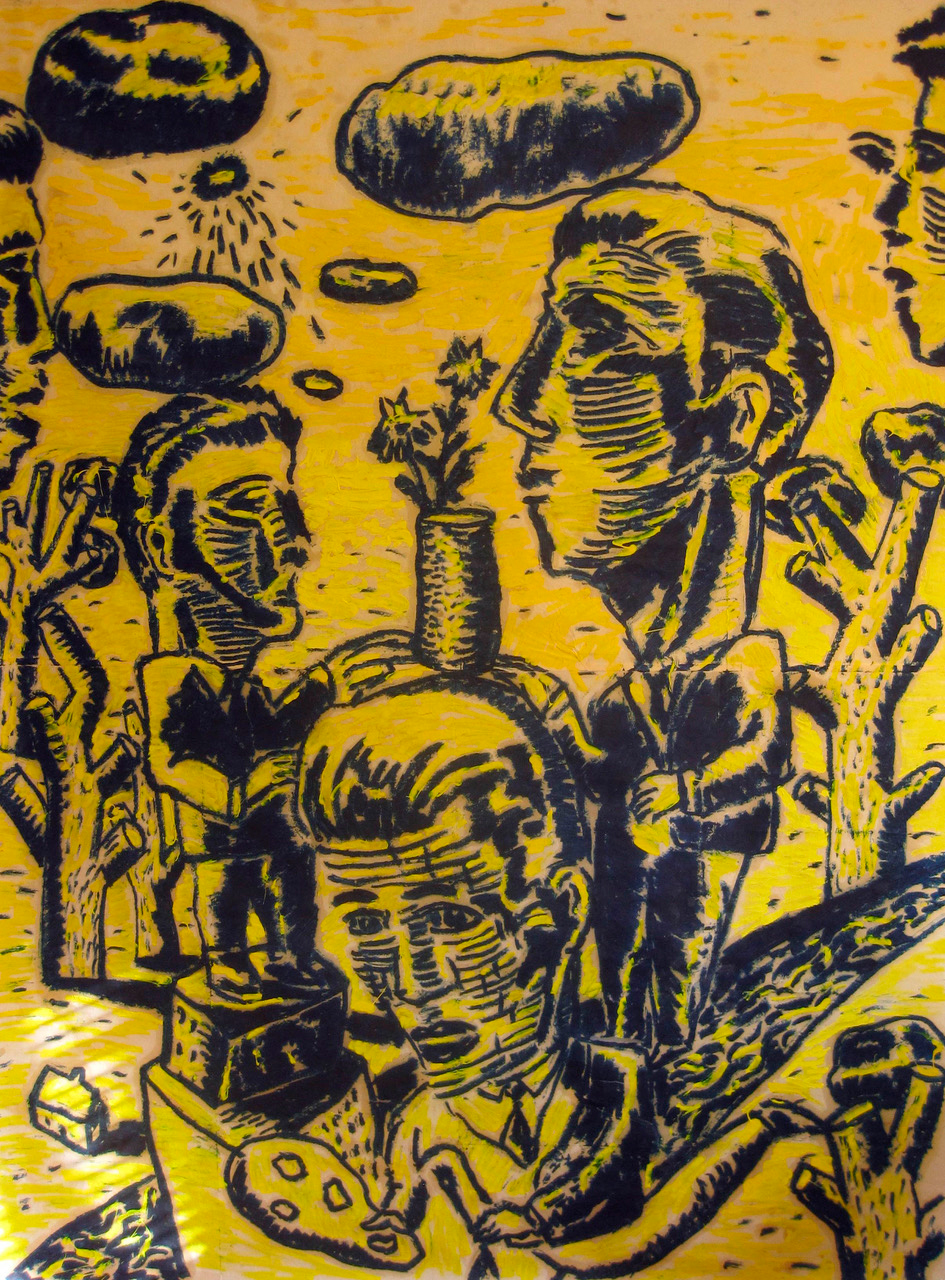 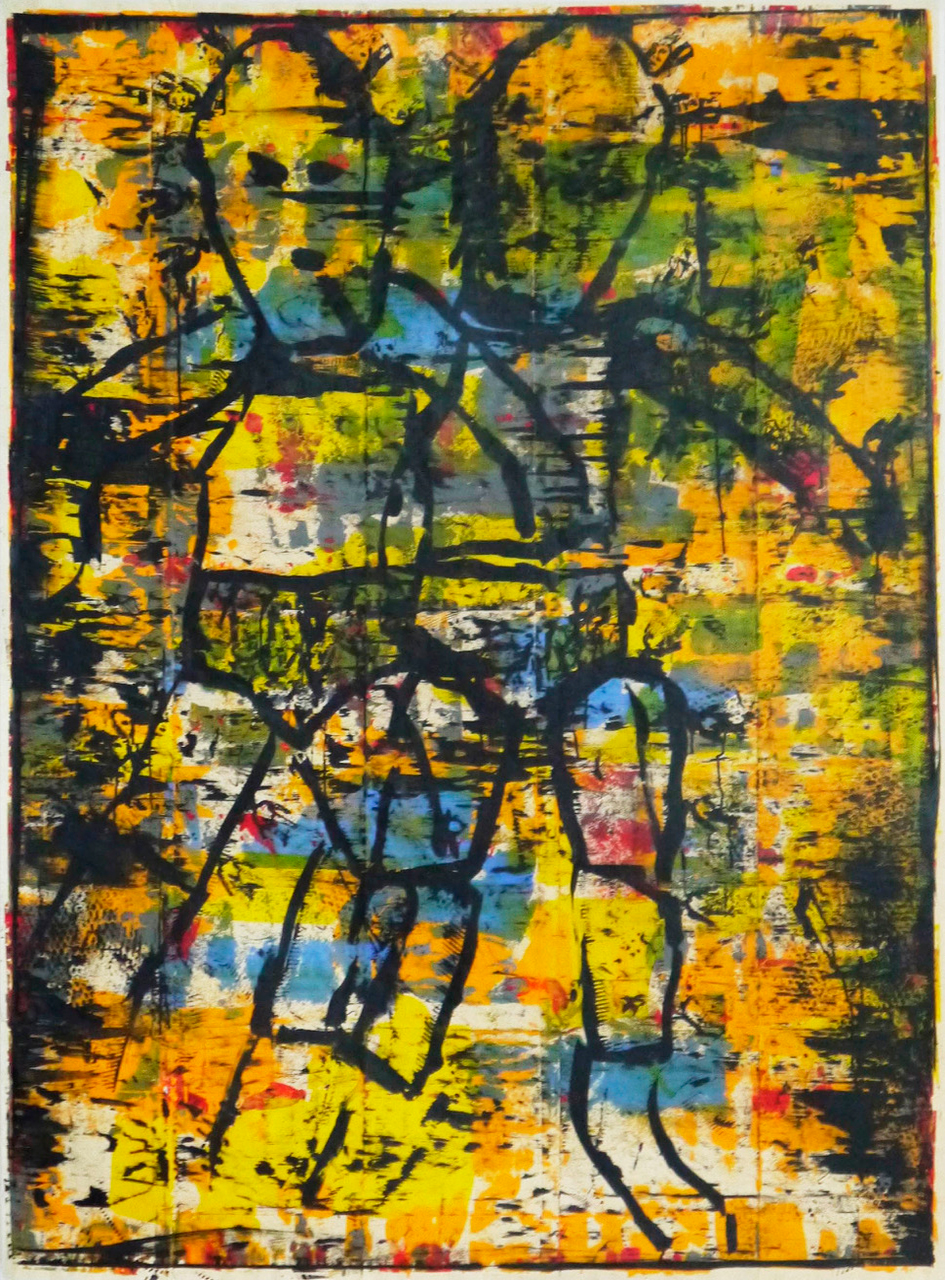 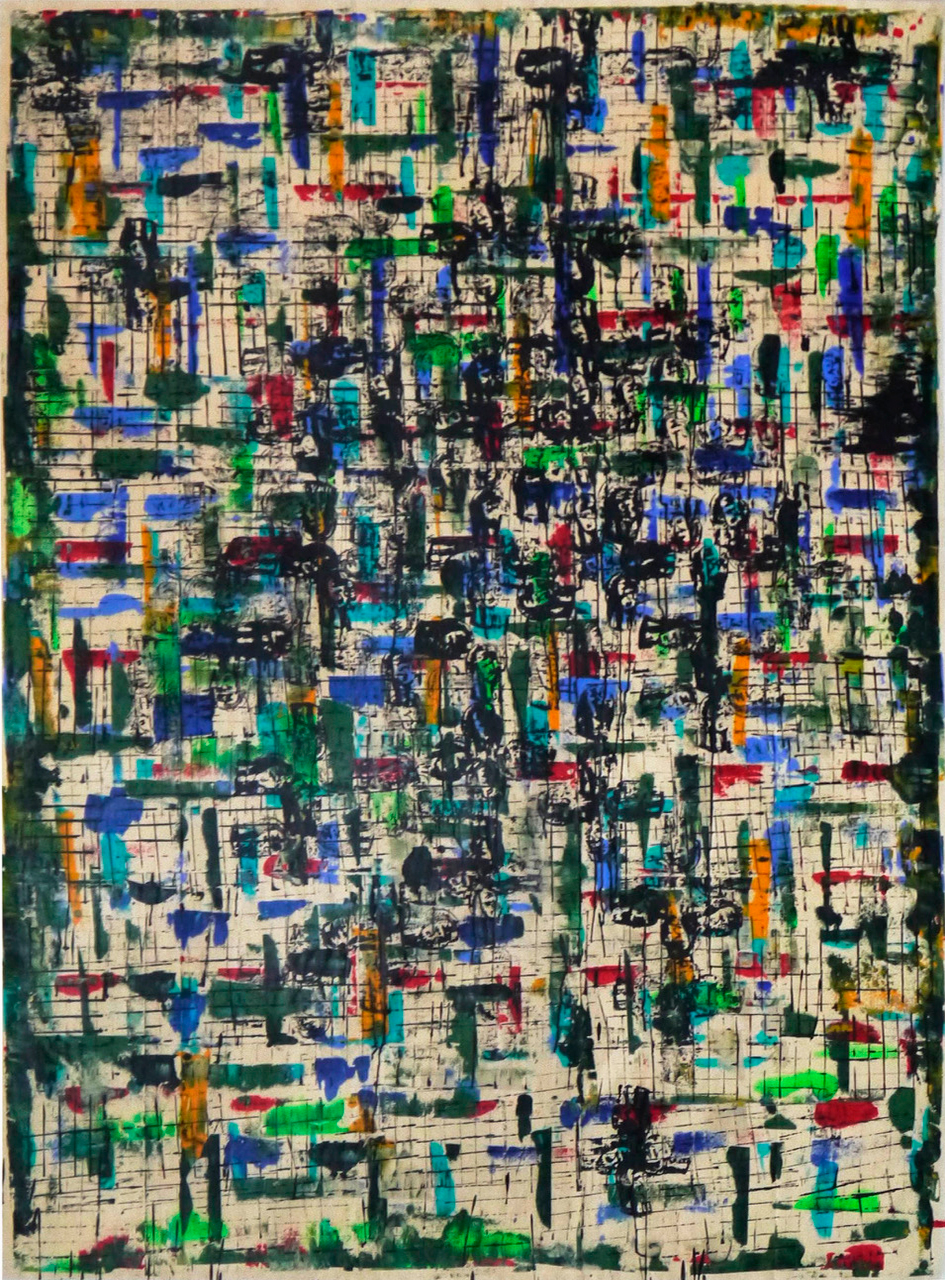 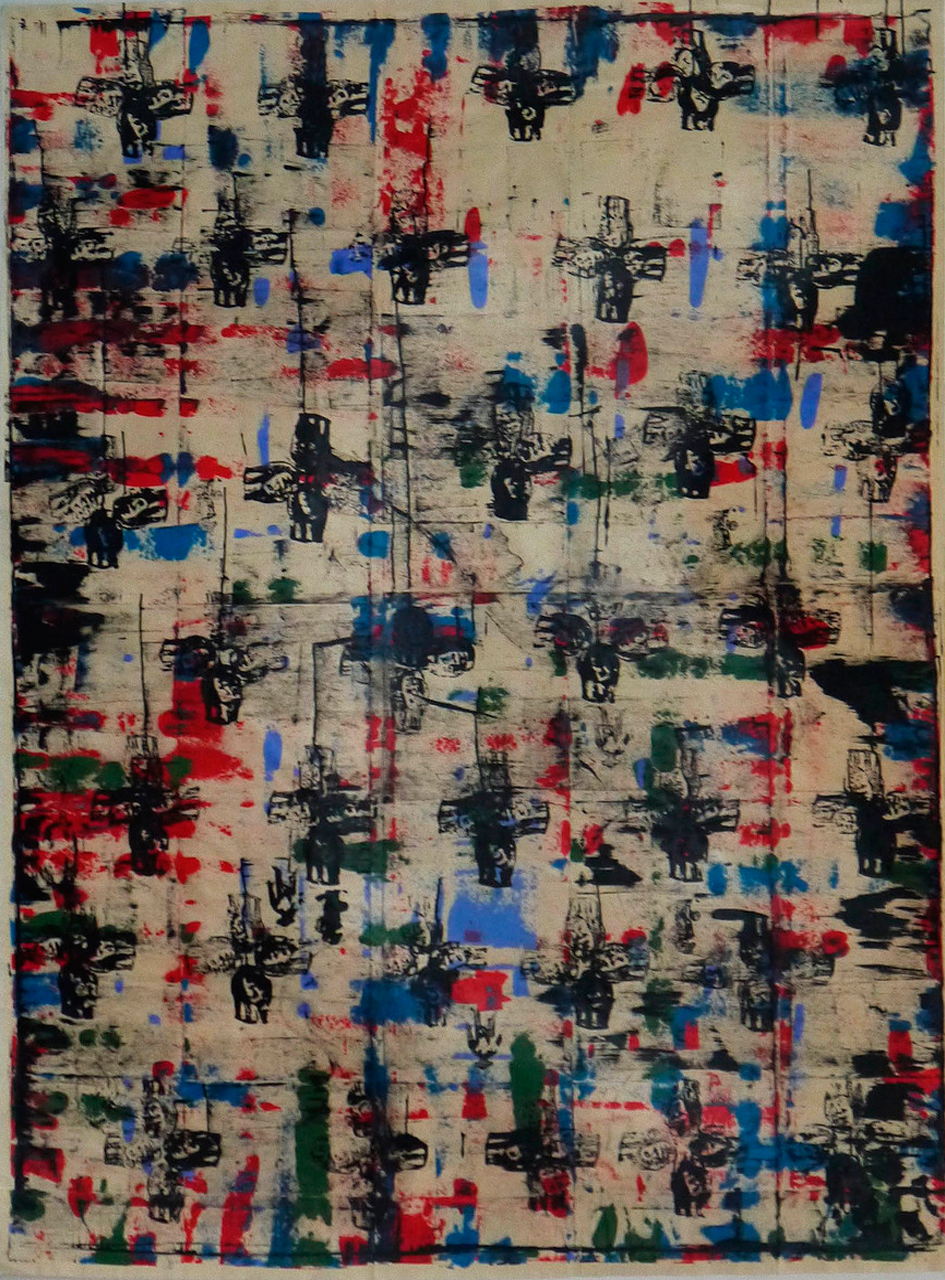