Marilou van Lierop's work consists of photos and photo-collages that she then paints. This alters their meaning; the original context disappears and is replaced by a new one. Typically, small or large groups of people are depicted, sometimes enormous masses. It is not the individual but the group that is central.

At first she painted nature – unbounded landscapes, in which different viewpoints were combined into one work; as such, nature leads a life of its own, independent of human regard. In this way, the complexity and chaos are expressed.
And it is this complexity and chaos, as found in our social reality, which is the subject of her recent work. Expressed more aptly, it deals with our inability to handle this reality and the strategies we develop as a response. The constructions we make, the stories we devise, these are ways to escape this complexity.
This collective manner of thinking and working is laid bare. Plans and grids are placed like a veil over reality, not because they necessarily correspond with it, but these are the ranking systems with which we make sense of the world. It’s like projecting the known onto the unknown, onto the ‘wild’.
The title of this series of works/exhibitions is "the legs of the ladder". It is a reference to a series of compositions applied directly to the wall. They consist of lines, words, and painted photos, in various formats, framed and unframed. The lines refer to didactic models, from theories of evolution to schematic representations of plants. The words relate to the laborious handling of complex systems. The painting of existing photos forms part of the same practice. It is the scanning of/ searching for the floating, unspoken stories that are to be found amongst people/worlds. 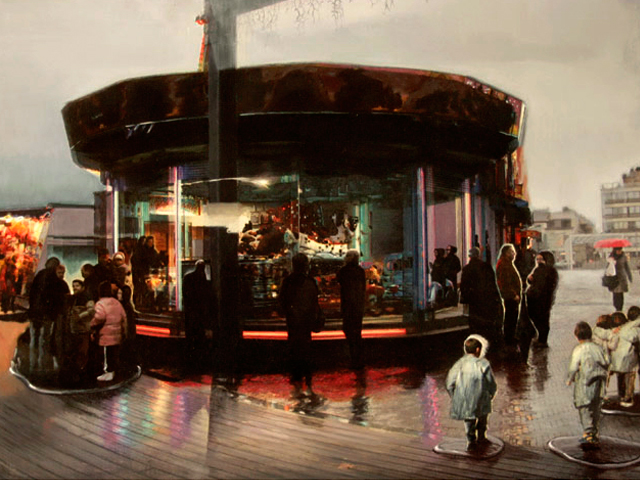