The wondrous world of the surrealist sculptor Luk Van Soom is populated with mythical figures and eccentrics: Atlanteans, scuba divers, mountain climbers, astronauts — in short, people with a vocation. He is also fascinated in the primal elements such as fire, water, planets, stars and clouds. His visual language of excessive forms, interlacing motifs, twisting lines and playful ornamentation refers to his intense affinity with baroque. Van Soom masters a great and intrinsic skill: the original forms are still modeled in clay. Afterwards, the models are translated in plaster, bronze, steal, aluminum or plastic. The retrospective exhibition Usine de Nuages (Factory Clouds) brings pieces together around the theme ‘clouds’, a topic that he often frequents in his work.

Luk Van Soom (°1956) lives and works in Rijkevorsel, Belgium. Originally he was a carpenter, specialised in furniture. Afterwards, he studied sculpture in Antwerp, Belgium at the Royal Academy of Fine Arts and also at the Higher Institute for Fine Arts (HISK) in Antwerp, Belgium. He was a professor at the Rietveld Academy in Amsterdam, Netherlands and also at the Royal Academy of Fine Arts in Antwerp. He is currently a professor at the St. Joost Academy in Breda, Netherlands. In his homeland and abroad, he has realised high-profile projects, exhibitions and commissions. 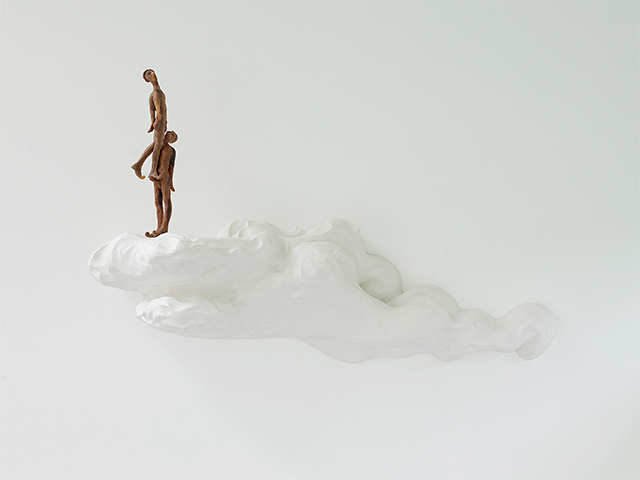